Introducing the Anti-Depressant Cat Calendar! Just in time for inauguration.

Who needs Lexapro when you have Button The Cat?

Button, formerly a very successful plus size cat model for FAT CAT Magazine, has agreed to come out of early retirement in order to make the end of the world more palatable!

No one needs to feel bad during Trumpageddon! A good apocalypse should be enjoyed!

And who needs all that Paxil, Prozac, Wellbutrin, and the new one just out last month, Soma, when all you really need is a chubby white cat with an eating disorder to get you through each day of the month on a calendar!

Whatever he’s on, I want some!

Maybe eating all five birds was a bad idea. . .

I’m not just another pretty face

I AM YOUR VALIUM!

Everything is better with a friend

(That is Button’s best friend, Onyx.)

Let me in the house and I will save you

Yes I am organic and I do cat yoga

Bonus pictures in case you haven’t ordered your 2018 Anti-depressant Cat Calendar and need some more to tide you over!

I just finished ordering an online lobotomy so I can get through the next 4 years. I know I will not need my brain anytime soon. The lobotomy comes with DIY instructions that even an already brainless idiot can follow.

My other option is selling my brain on eBay. Then I can finance a trip to Washington, D.C. to interview for a job in the Trump Ass-ministration as the head of Intelligence. I figure my reptilian brain is pretty much all I’ll need for that so I will make sure not to sell my brainstem or medulla.

I will also be renting out my heart for the next 4 years. Who needs one of those in this climate? I have posted my heart on RentAnOrgan.gov so if you, or someone you know, need a heart (like a Trump supporter) you can bid on it and give it to them for New Year’s as revenge.  Expect to compete in a bidding war because President-Elect Dump and his boyfriend Putin are racing to collect all human hearts and burn them in this new FuckOverFest cold war that is now our collective reality. The stupid people have finally won!! Now everything will be great! Because Ignorance always makes Everything Better!

Being the oracular business woman that I am, I also bought ownership of the Wizard of Oz song If I Only Had a Brain, sung by The Scarecrow.  I am going to make so much freakin’ money owning next year’s theme song!

Welcome to 2017: how stupid can a country be and still exist? Stay tuned for the answer which will probably come late next year.  Already little girls are asking: Can an apocalypse have an apocalypse? 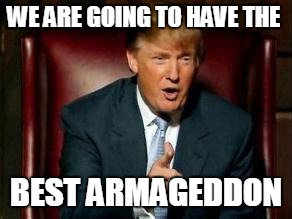 I think my lobotomy is going to need a lobotomy.

It’s 1404 days until the next election: how are you surviving?

In an exclusive interview with Dumbfounded Magazine, Satan reports, “I just couldn’t get behind Trump. He’s just too evil. I might have endorsed him if he hadn’t had the support of so many vile GOP leaders and half the population of the United States, but under those circumstances, I just couldn’t go through with it. It’s just too vile, even for me. He’s giving the Devil a bad name. In fact I’m thinking of leaving this field altogether.”

Satan went on to say that Hillary is not and never was evil. “She didn’t meet the criteria. The most she ever suffered from was some minor league-bad and that’s mainly because she married a man and tried to reform a sexist society. Look I know bad, and she’s no bad.”

Satan continued, “Most sociopaths I know didn’t vote for Trump either. Your basic serial killer/psychopath took a long look at him and his organization and said, ‘Whoa, wait a minute. I don’t want any part of this. I have to draw the line somewhere and this is it. What do I tell my children when I come home from a long day of ripping off pensioners and killing people with knives? I just couldn’t do it.”

Apparently, narcissistic personality disorders, and other personality disorders, have started seeking treatment in droves. One well-established narcissist explained, “With Trump at the helm, there’s nothing for us to do. He’s cornered the market on psychopathology and sucked all the air out of the room. There’s no benefit now to actually being a garden variety narcissist: he’s sucked up all the selfishness and so the rest of us might as well get into treatment and sign up for the Democratic Party, so as to give our lives some purpose and meaning. Trump has being a selfish bastard all locked up and there’s no more room for us personality disorders. As part of my treatment, I plan to work a Crisis Hotline at least until the mid-terms.”

Not sure if this is the silver lining we were hoping for, my brave friends, but maybe it’s a start.

May we all have the good fortune to be saved by a sociopath.

Oh god, I woke up with yet another Trump Hangover. Nothing that an hour in the bathroom couldn’t handle.

What did you do to get through Day 3 of Trump-apocalypse?

Post here (scroll down to the end of the blog for comments), post on FB or write to me at dreamspinning@gmail.com.   I plan to post other people’s ways of coping when appropriate and will do it anonymously unless you ask me to post your name or pseudonym.

Hang in there everyone,